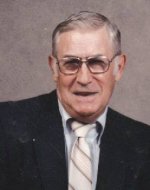 He was born April 2, 1931 in White Sulfursprings, WV to the late John and Bessie Rudd. Geno attended the International Pentecostal Church of Christ in South Charleston. He was known through out the country as an avid carpenter, who created his own designs. He specialized in furniture from porch swings to bedroom suits.

He is preceded in death by his sister and brother-in-law Peg (Taylor) Workman, brothers and sisters-in-law; March, Marvin(Grace), Denny, Lowell and John Rudd.

Geno is survived by his wife, of 40 years, Debbie (Cornell) Rudd of South Charleston, sisters-in-law Dorothy, Sheila, and Jenny Rudd, special brother and sister-in-law John(Patty)Finney of South Charleston, 33 nieces and nephews. The family wishes to thank the Arbors at London Alzheimer's Unit for the care that "Pawpaw" received.

Family to receive friends from 6-8pm Tuesday, October 23, 2007 in the INGLING WILLIAMS FUNERAL HOME South Charleston. Where funeral service will be held 11am Wednesday, October 24, 2007. Burial will follow in the South Solon Cemetery.